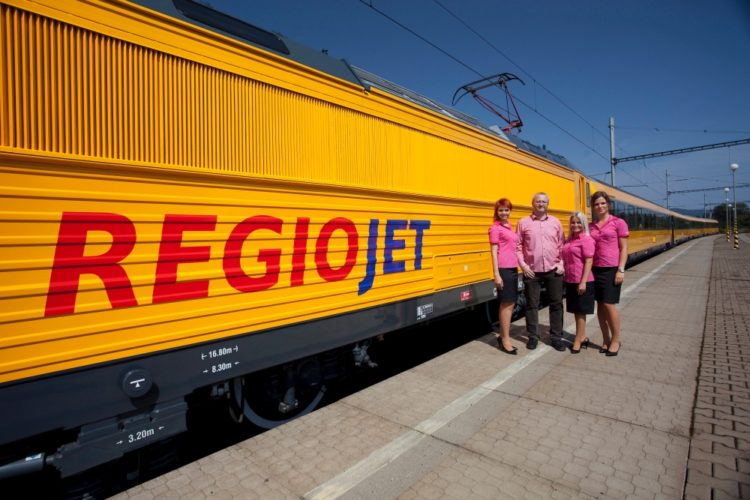 Brno, June 19 (BD) – Another bus operator moved closer to the city center to Grand Hotel bus station. Zvonařka is obsolete, too far, and underused. As for trains, the connection between Brno and Prague should be more frequent and comfortable with RegioJet delivering blow to the Czech Railways once again. Photo: RegioJet

For authorities, it is another hint that Zvonařka as the main bus terminal administered by Tourbus is not efficient anymore. Not as it is right now. It was built in the 70s and is not close at hand at all and therefore experiences bus drain. The public transport network omits Zvonařka from its scheme although the plan in the 80s was to build underground transportation or at least “Rychlá šalina” interconnecting partially with underground railways Zvonařka and distant city parts with the center. Obviously, that all changed in the course of time.

Almost 10 years ago, Radim Jančura, the founder of Student Agency in the Czech Republic, introduced the departures of yellow buses right from the bus station at Hotel Grand. Compared to Zvonařka, more bus companies, already 18 altogether, utilize this spot as their bus terminal. This has recently caused crowds of travelers hurrying zigzaggy around many buses in a row trying to find their connection to the world. “There are more than 100 buses per day, even more on Friday and Sunday,” informs the spokesperson of Student Agency, Aleš Ondrůj in Brnensky Denik. Hotel Grand bus station is owned by Brno Public Transport Company that earns almost 4 million CZK per year by operating this convenient bus-station-spot.

The company Student Agency is also responsible for another change in Brno transportation. In November, the new railway timetable will be published. Ondrůj envisaged that Brno-Prague RegioJet trains should depart 12 times a day. It all depends on the agreement between RegioJet and the Czech Railways. They refused to comment on the increased RegioJet trains as RegioJet is their greatest rival. The spokesperson emphasizes that the scheme is only in its preliminary phase. So far, it is not clear whether their trains will get the railway capacity they need. “For sure, we want to ride from Vienna and from Bratislava 4 times a day,” ensures Ondrůj.

https://brnodaily.com/2017/06/19/breaking-news/better-connection-from-brno-to-prague-and-more-buses-from-the-city-center/https://brnodaily.com/wp-content/uploads/2017/06/regijet-more-trains-prague-brno-e1497857771943.jpghttps://brnodaily.com/wp-content/uploads/2017/06/regijet-more-trains-prague-brno-150x100.jpg2017-06-19T07:45:51+02:00Zuzana PápayováBusinessNews - ArchivedTransportBreaking News,Brno,Business,Transport,Travel TipsBrno, June 19 (BD) - Another bus operator moved closer to the city center to Grand Hotel bus station. Zvonařka is obsolete, too far, and underused. As for trains, the connection between Brno and Prague should be more frequent and comfortable with RegioJet delivering blow to the Czech Railways...Zuzana PápayováZuzana Pápayovázuzanazetqapapayova@gmail.comEditorSlovak expat in Brno; a philosopher by night and rebel by fate who is too eager to understand it all, yet too understanding to loot the mysterious magic of the world.Brno Daily