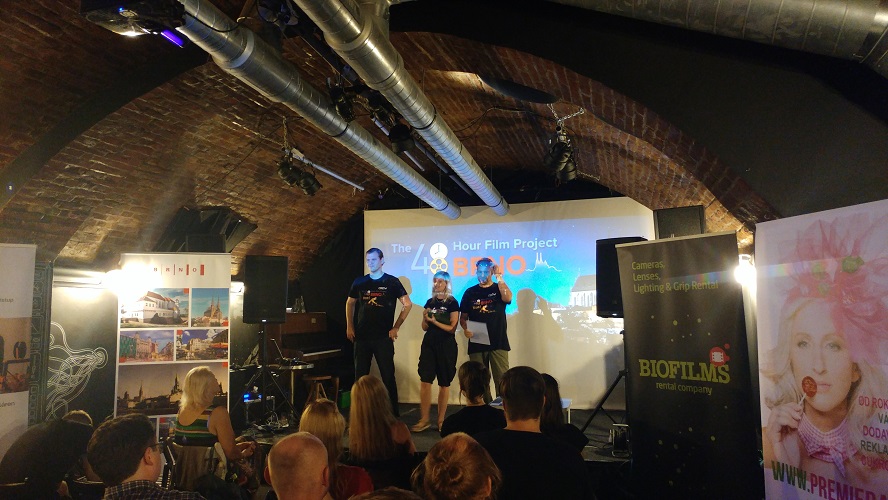 Brno, June 18 (BD) – Friday evening, 48 Hour Film Project’s organizers started the countdown to the deadline for movies to be created in mere 48 hours!

The rules of the competition are unforgiving and quite intriguing. All the films and necessary paperwork must be submitted no later than tonight at 7:30 pm. Being tardy means not competing for the main prize – entering international film competition in States.

Nine teams of enthusiastic filmmakers and organizers met in the funky pub MusicLab in Brno to launch the competition.

To make sure that nobody prepared anything ahead, the teams have to feature a few particular elements in their films. One of them is a key. Another one is a line of text – “There is more philosophy in a bottle of wine than in all the books.” The last requirement should be a character having a role of courier, named either Oscar Prygl or Odeta Prygl.

The films should be between 4 and 7 minutes. Every team got two genres in a draw at the Friday opening. They may elaborate either one or both of them at the same time. The genres range from musical and comedy to detective stories or silent movies.

“Our on-line casting is one of a kind , at least in Europe, I think. More than 50 actors from the Czech Republic and other countries have submitted their profiles”, explains Emanuele Ruggiero – one of the organizers of the 48 Hour Film Project. First screening of the movies takes place next weekend along with the ceremony and press conference at Radost Culture Hall on Cejl; find more here. We are very excited to see what the teams come up with during these sleepless 2 days.

For some contestants, it will be the first time participating in such an event, some have already took up the challenge in Prague a few years ago. Some of the participants came to Brno from the States or England. One of the teams shared with us the biggest issue they have faced in the past – difference of opinions. As for the resolution of the problem, the team leader said that he is going to be “strict and merciless this time;” after all, they have only 48 hours, not much time for long talks.

https://brnodaily.com/2017/06/18/breaking-news/48-hour-film-project-sleepless-weekend-for-young-filmmakers/https://brnodaily.com/wp-content/uploads/2017/06/48-Hour-Film-Project.jpghttps://brnodaily.com/wp-content/uploads/2017/06/48-Hour-Film-Project-150x84.jpg2017-06-18T14:18:58+02:00BD StaffArt & CultureNews - ArchivedBreaking News,Cinema,Culture,Czech Republic,Events in BrnoBrno, June 18 (BD) - Friday evening, 48 Hour Film Project’s organizers started the countdown to the deadline for movies to be created in mere 48 hours!The rules of the competition are unforgiving and quite intriguing. All the films and necessary paperwork must be submitted no later than tonight...BD StaffBD Staff team@brnodaily.czAdministratorBrno Daily - English News and Events in Brno.Brno Daily