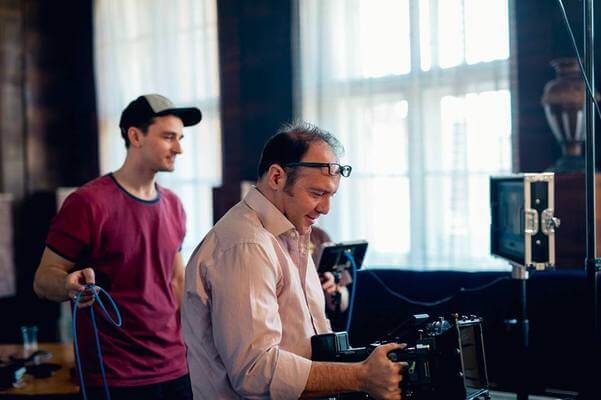 Directors Emanuele Ruggiero and António Pedro Nobre – expats in Brno themselves – gave their audience the opportunity to see the city through the eyes of foreigners with their documentary “CZizincii/MYgranti”.

On Monday 22, the big screen of “The Distillery” in Brno was dedicated to foreigners. We watched “CZizincii/MYmigranti” in a room packed with Brno’s locals and internationals. During the 80-minute projection, we empathized with life stories of expats from all around the world. Movie director Emanuele Ruggiero was present at the screening and we couldn’t resist asking him a few questions about projects with his co-director António Pedro Nobre.

“Nobody was actually disappointed with living in Brno.” Director Emanuele says that most of the movie characters were and still are happy to live in the country; many of them have their homes and families here. Emanuele comes from Milan and has been living in Brno with his Czech wife over four years.

Shooting of the film started three years ago and Brno Expat Centre, one of the sponsors of the movie along with Foreigners.cz, arranged the casting for all 20 movie characters. “CZizincii/MYmigranti” was officially supported by Brno Municipality and its mayor, Petr Vokřál. Since its premiere, the film received worldwide attention and recognition.

“There are so many things to talk about.” responds the director when asked about expats in Brno. The film does not go into detail about the visa problems some expats have to deal with. “We focus on dialogue between cultures. Cultural diversity and a simple dialogue is an essential condition of human society.”

The Dancer and Wild Czech 70’s

Emanuele gave away to us that they are working on another documentary which will be finished this year. The new project’s name is “Krycí jméno: Baletka” (“Code Name: Dancer”) and it’s a spin-off of CZizincii. The name of the new film was inspired by Mrs. Ivanka’s life story; she appeared in “CZizincii/MYmigranti”, too. As many others, Ivanka was forced to leave the Czech Republic for her political views in early 80’s. Some of the emigrants never came back, some did.

The two directors won’t stop there. They want to start another project about a group of famous photographers in Brno “EPOS”. “They’ve recently had an exhibition here in Brno. I was amazed. I thought we have to do something with them.” enthusiastically explains Emanuele. The photographers managed to perfectly capture the situation, atmosphere, and culture of the Czech 70’s.

Emanuele Ruggiero directed the documentary films “L’essenziale è invisibile agli occhi” (IT, 1995), “Toro emotions” (IT, 2007) and co-directed Czizincii/Mygranti (with António Pedro Nobre, CZ, 2016). His directorial debut with the short film ” Never so close” in 2010, obtaining various participations in Short Film Festivals in Italy and abroad, winning several awards. He also conducted 85 interviews for the mega documentary project for the USC Shoah Foundation by Steven Spielberg and directed the documentary series “Den na železnici s” (BTV, CZ, 2015). Apart from documentaries, between 2001 and 2012 he has worked in the popular Italian soap opera CentoVetrine. Emanuele has more than 25 years experience in TV, Film and Video production.

https://brnodaily.com/2017/05/25/culture/brno-through-the-eyes-of-expats-interview-with-director-of-czizinciimygranti/https://brnodaily.com/wp-content/uploads/2017/05/149563504175428.jpghttps://brnodaily.com/wp-content/uploads/2017/05/149563504175428-150x100.jpg2017-05-26T08:28:49+02:00BD StaffArt & CultureCinema,Culture,Expats CzechiaDirectors Emanuele Ruggiero and António Pedro Nobre - expats in Brno themselves - gave their audience the opportunity to see the city through the eyes of foreigners with their documentary 'CZizincii/MYgranti'.On Monday 22, the big screen of 'The Distillery' in Brno was dedicated to foreigners. We watched 'CZizincii/MYmigranti' in a room...BD StaffBD Staff team@brnodaily.czAdministratorBrno Daily - English News and Events in Brno.Brno Daily